May you have a wonderful day!! Hope you get to spend time with friends and family. Eat healthy. Be safe.

Be thankful for what you have. Pray for those without.


Posted by Tiger's Lair No comments:
Email ThisBlogThis!Share to TwitterShare to FacebookShare to Pinterest
Labels: Blogging

So this artist Psy from Korea has taken over the US with his zany music video. My hubby showed me the video back in July and I thought it was the mist ridiculous thing I ever seen. He thought it was hilarious. I think I may be missing the gene that makes this hilarious. Since then there are so many parody's if this video. There's a Mitt Romney Style to name one. It got into the presidential campaign.

So what does Gangnam style me to me. It means to be wild and spontaneous, but have fun doing it. I'm not so care free and spontaneous. I would love to be. I always admired people who just picked up done exciting things. Me? I have to plan and over analyze anything that I do. I just can't jump in. Take jumping into a pool. You can do a run and jump in. Me... I have to know how deep the pool is first before I take the running leap into it.

So what am I going to do Gangnam style? I'm going to take a lot of leaps of faith when travelling and everyday life. I am no longer by myself. I have someone who has my back if something goes wrong. I never felt like I had that before. My biggest leap will be quitting my job to concentrate on writing full time. I don't know when that will be. But it is some time in my future. I need to save up a nest egg, for such occasion. Until then, expect me to go dune bugging, zip lining or something dangerous (my perception danger) on my travels. Maybe I'll conquer most of my fears.

What leaps of faith do you wish to accomplish? What's holding you back?

Posted by Tiger's Lair No comments:
Email ThisBlogThis!Share to TwitterShare to FacebookShare to Pinterest
Labels: Blogging

The Simpsons: Tapped Out


I'm a fan of the Simpsons television show. I've watched them since they were on the Tracy Ulman show. They were a bit raunchy then but has toned down to become mainstream. Last year, EA games, Gracie Films and Fox TV joined together to create "Simpsons: Tapped Out". The game was an overwhelming success that EA servers crashed and had to remove the game from the App Store. I remember that day well. I was one of the millions of people trying to download the game the day the server crashed. So I lost my opportunity for a year. In recent months, Tapped Out came back out in the App Store. I picked it up at once. I excitedly started playing the game. 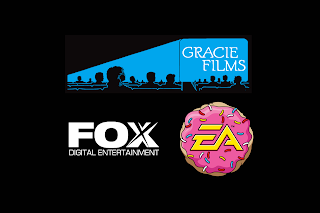 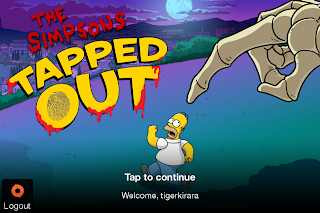 The premise of the game is as follows:
Homer was at work at the plant playing with his myPad instead of paying close attention to the power plant. His lack of attention caused the plant to explode which in turn blew up Springfield.

What you need to do is as follows:
You must assist Homer in rebuilding Springfield.

Like typical SimCity games, you build houses and businesses and collect taxes to build more of the same. In this game, you get to build monumental buildings from the show. Some buildings comes with a character and some don't.

Characters are not a big deal in SimCity games. In this game it's the familiar characters that makes up the town. Their personalities shine thru in the game. You can make Homer eat at Krusty's. You can make Ned Flanders hold emergency bible study. 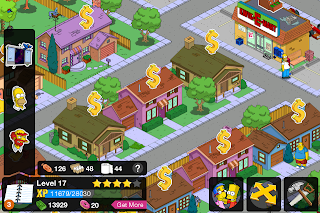 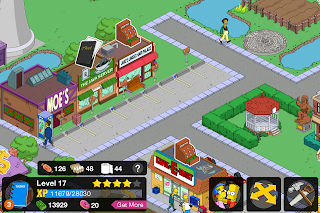 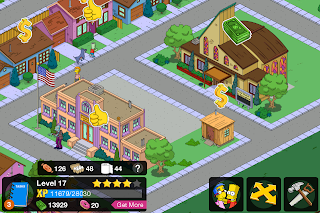 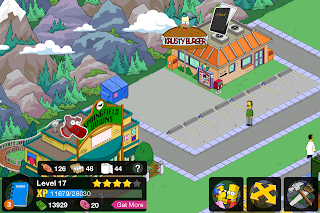 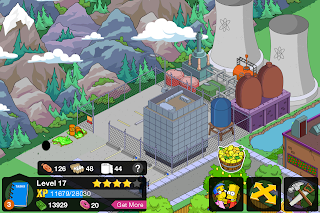 The Negative
Unfortunately this game has in app purchasing. It is apparently the new way for apps to make money in the App Store. I don't like it at all. I'd rather pay for the full game at once. In this game the in app purchases are Donuts. You get donuts as you level (1 or 2). However, to get anything with the donuts you have to have a lot of donuts. They do not make the items very accessible with a moderate amount. Some of he characters can obtained only by donuts. I saved 40 donuts and got the Squeeky Teen. He was he cheapest. The other characters are 60 donuts plus. So I probably won't be getting them. The costs to buy donuts are ridiculous too. You can also buy dollars. Here are the scales: 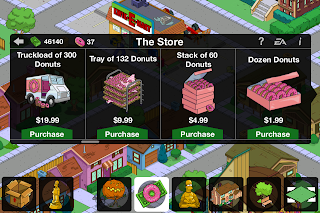 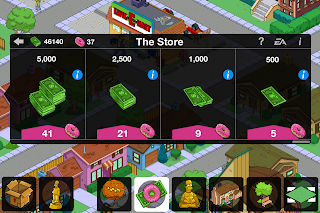 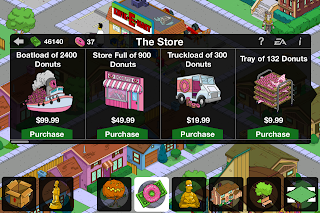 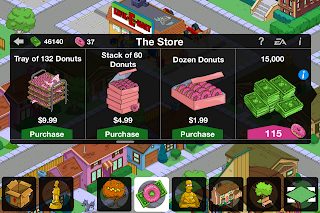 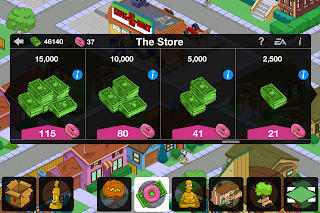 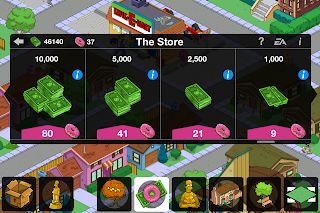 Second issue which is not so detrimental is the costs of buildings. They really out of line as to how much they pay out. Take Luigi's restaurant. It costs 64,500. It only pays out 500 every 10 hours. You only make 1,000 a day. Most of he buildings at like that. It takes a while to accumulate money to buy a new building or to buy land. The costs to buy are astronomically high. It just gets higher and higher. You have no choice to keep your character doing jobs and planting crops. But if you keep your characters so busy, you do not get the quests in the time you need them.

My strategy to making cash is to visit other towns (to discuss next), have my characters do quests constantly, and collect my taxes ASAP. This has me logging onto the game throughout the day. Which is not good when you are at work. They make it so you really have to purchase dollars and donuts, but I refuse. I will play with theirs sing characters and buildings. Now if someone gives me an iTunes gift card, I may purchase dollars and donuts. I just refuse spending my money on them. It's the principle of it.

Last negative issue. It is small but can be detrimental. You cannot play this game without a data connection. The game is ran off of EA's servers. It can be a bummer for those who are without constant data connections. You can't even load the game without it. 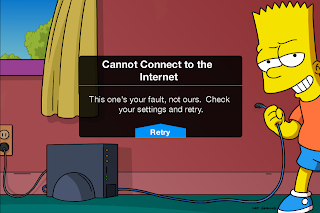 The Social Aspect
like a lot of games nowadays, this one can be social. The game will want you to create an Origins account. This is an EA Games account. It can be used with other games the EA has. Once you have the account you can and friends to your account. If they are playing Simpsons, you can visit their towns. You can see how they are building their towns, make money and experience by collecting their taxes. However, you are limited to 3 chances per town to collect taxes.

I like visiting other towns because it gives me ideas on how to I should place my buildings and decorate my town. There are some people who don't really give a damn. They just buy the buildings and places them ridiculously. They don't even resemble towns. Why play the game then?

Special Events
For the month of October, Simpson held a Halloween event. You were able to get additional characters and buildings. You also go to squish zombies for new forms currency: treats, eggs and toilet paper. Treats allows you to buy special buildings. The eggs and toilet paper allowed you to visit friend's towns and vandalize houses with eggs and teepee their trees. All in good fun.

Overall experience and conclusion
I really love playing this game even with the negative points. Even with the high priced in app purchasing, getting things done is doable. It doesn't limit gameplay at all. They also don't detract much from the enjoyment. If a game holds your attention, it is worth playing. EA came out with a game that is compelling. I even found a wonderful site that gives more detail into the game. The site lists each character w/ all their jobs, buildings w/ their payouts and more helpful information. You can check out the site here.

Simpsons Tapped out is a universal app. It fits all iOS platforms. You can even play on iPhone and continue on your iPad. This is where having a constant data connection comes in to play. Overall, I give this game a solid B+.