I follow an instragram account called 'pitbullsofinstagram'. It's a page and a movement to stop Pitbull hate. Pitbulls are not aggressive dogs. They don't attack unconditonally. Do you know that Pits are the most loyal dogs. The bad ones you hear about in the news are trained to be mean. Just like ANY dog, if you don't take the time to train them, then they will be wild. Pits are very lovable and are known to be huggers. They are great around kids and babies. You can't ask for a better dog.

So when I saw a post that a town in Louisiana was putting an ordinance to ban all Rottweilers and Pitbulls I had to sign the petition. People had to get their dogs euthanized or sent out of town by Dec 1st. That is the most assinine and cruel thing ever.

Couple days later, they posted that the petition and public outrage (nationwide) made them reverse the ordinance. Yay!!!

I believe that if we put your heart in it and stick up for what you believe is right, you can accomplish great things. My one signature showed I cared and it brought about a change.

I do wish we can apply this same sentiment to all walks of life. However, life is never fair.

Posted by Tiger's Lair No comments:
Email ThisBlogThis!Share to TwitterShare to FacebookShare to Pinterest
Labels: The Issues

Today my husband invited me to a charity event that his company sponsored: Fashion for Action by Housing Works. 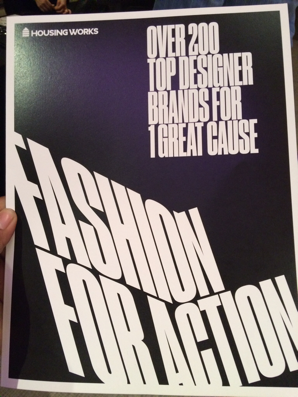 It was an evening to buy designer clothes 70% off retail value, silent auctions and some dining. It was an excellent party. We got in for the early admission. So we drank a little then went to shop. All proceeds goes to help fight for a cure to HIV/AIDS. It's not too often that I get an invitation to such an event.

We picked up some accessories at the show. I wanted a pair of Diane von Furstenberg shoes but it was still costly based on how much I would wear the shoes. I ended up buying a Betsy Johnson watch and a Christmas present for my mom. 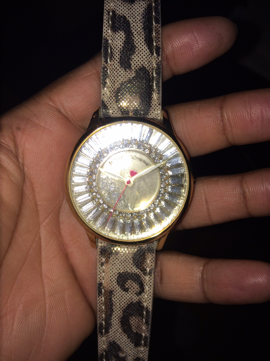 Hubby got a bag and some designer chonies (underwear for us North Easters). When we were done, we went back to the party. That's when the action started.  I walked up to Jason's co-workers and they are having a heated discussion about whether someone was a girl or a guy. They decided to ask me to make the decision. I turn to see who they are talking about. To my pleasurable surprise, it was Isis from America's Next Top Model. She was my favorite from that season. I think she was sabotaged. She should have made it to the end. I got to take a picture with her. 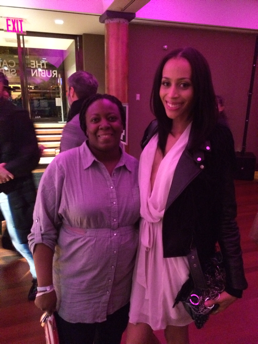 She was so pretty. Excited!!! Then the group went to take group pictures at the photo booth. After goofing around, who do I spot? None other than Miss J from America's Next Top Model. I love him. He was great! I got to take a picture with him too!!! 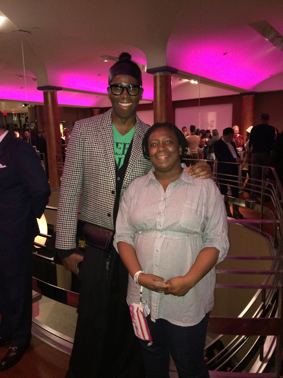 I LOVE this man. He is fierce no matter what he does. I am like so star strucked tonight. I'm literally in heaven. He even gave my hubby pucture taking tips. He is a lot taller than I imagined him to be. Love Love Love.

The night was not even done with surprises: 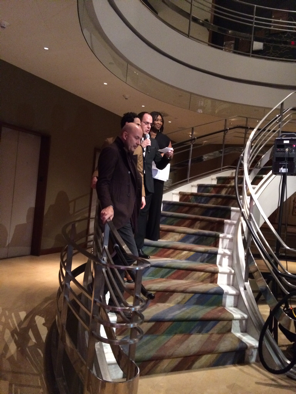 Bottom guy is John Varvatos, next up is Zach Posen and The very top is Betty Smith. She's going to be on Fashion Queens on Bravo. Not a great picture because I didn't have room to go any further. There was also a runway show down those stairs. Fun Fun Fun!

It was a magical night. I must thank my hubby and his company Matthijssen Business Systems NYC for the invite. Without them, this wonderful night wouldn't have happened.

Posted by Tiger's Lair No comments:
Email ThisBlogThis!Share to TwitterShare to FacebookShare to Pinterest
Labels: Blogging

To Be or Not

I recently been following a blog called Beyond Black & White. It is supposed to be a site for like minded people to gather to find kinship with interracial relationships. I do like the site. I just RSS their blog. I don't really go to the site itself. I do most of my reading in the subway. No reception there. Anyway, I digress. I found this site thru a friend's Facebook page after I got married. Some of the ideas I've read to date I find conflicting. I also don't like labeling interracial relationships as "swirling". Why can't it just be called a "relationship"? By naming it something different doesn't make it seem like it's something out of the norm? Something that is not allowed? We are in the 21st century now. Yes I know there's still rampant racism going on. I don't consider my relationship with my husband swirling. Hell, I didn't even know there was a movement. We were just 2 like-minded people who met, fell in love and got married. I barely notice his skin color. He barely notices mine. I just see Jason and he just sees Colette. Let me give you an idea of how I grew up.

I'm a product of a 2 children who has 2 sets of interracial parents. My grandfather on my dad's side is a Sephardic Jew from Spain and my grandmother on my mother's side is from Cuba. However, if you look at any of us, all you'll see is Black. I grew up on a diverse block in Brooklyn. My neighbor to my right was Greek and my neighbor to the left was Irish. The kids my age all ran the gamut from either White or Black. There weren't any Latinos on my block growing up. My parents taught me not to see color, but remember that I was Black and I have a lot more hardships to undertake to be treated fairly in a White dominated world. I played with White kids growing up as well as the Black kids.

Now as I got to Middle school (JHS for those of us in NYC), my block started changing to working class Black people. We still had a few White folks still living on the block. One of them was my good friend Kristin. Did I notice she was White? Yes. I never thought anything of it. We had the same likes in clothes, music, friends and hobbies. We went to the same elementary, JHS and HS together. JHS was the toughest time period for me. It was the darkest 2 years anyone could have. In the darkest hour a knight in shining armor came to my rescue. Was it a Black boy? No. He was a Latino boy. I teenage-loved (differentiated this love because it's young foolish love) that boy. He was also having the darkest 2 years too. How come I didn't fall for a Black boy? Well, you see, I was not attractive to most Black boys. I was dark skinned, skinny, with a big ass. This was not in style then. You had to be light skinned with nice eyes. But I was considered their "homegirl". You know, the best friend who was a girl.

After JHS, I dated a lot of Black boys to men as I was older. I can say, that I never had a Black guy cheat on me. I ended up being the "other" woman. In HS, I dated this 23 year old guy behind my mom's back. I got myself in trouble dating him, to find out he was engaged to be married. That was a huge blow to my ego. So after that, I never committed to anyone for a while. In my 1st college, I dated a senior seriously. I messed up the relationship because of baggage from my past. In my 2nd college, I had one of my longest relationships with a Black guy. We were together for 3 1/2 years. We ended our relationship because our paths were not going the same way. I wanted to move back to NY and he didn't want to move there.

I returned to NY and I found what I thought was a great guy. We were together for 3 1/2 years too. He ended up moving to NC. He then started claiming that our 3+ year relationship wasn't a relationship. I found out why. He was married all the while. I didn't realize that I was the "other" woman yet again. I had all of his attention and his time. After him, I rebounded with a Latino guy. We were together in total 2 years (multiple break ups). I broke his heart. He broke mine. But in the end, we still managed to be friends.

After him, I didn't bother with with relationships. I just dated. However, dating had gotten really old and annoying. I don't like wasting time on random men. I dated all races but predominantly Black, because they were more accessible. I had given up on dating right before I met my husband. My husband came out of left field. I wasn't looking for him. We just meshed because we have very similar tastes. I didn't even know how he looked at first. It was all thru a video game chat. (Yes, I'm a girl gamer and I'm Black. It's a rarity.) and we became inseparable. When I found out he was White, it didn't even cross my mind that it was taboo. I just saw Jason. I was more apprehensive about meeting his parents. They greeted me with a huge hug and accepted me as is.

So for me, my relationship is a regular relationship. I'm not swirling nor was I seeking a man from another race. I see people as people. Race is the last thing that comes to mind when forming any type of relationship. It is all about how you treat me that decides if I want to be your girlfriend (too late for this option) or friend. The argument I want to ask is; if dating outside your race is called "swirling", then having friendships outside of your own race, should that have a different name other than "friendship"?