Today, a group of friends and I went out to a fancy club together. The doorman checked us out and let everyone in. Everyone except me, that is. The doorman's reason: "Her face looks like a baboon's arse." My "friends" all went in anyway, leaving me to walk all the way home. FML

If your friends leave because you can't get in the club, then they really aren't your friends.

Today while at my job as a store clerk, I walked by a family. I smiled at their little boy, who responded by flipping me off. As I was walking away, I looked back in time to catch his dad give him a high-five. FML

This is why our kids are so rude and violent today. Parents are teaching them the wrong things.

Today, I finally got my laptop back after my friend broke it a few weeks ago. As I walked back into our place with my laptop in my bag, the same friend burst out and tackled me. My bag fell and slammed into the floor. Guess who has to pay for another repair. FML

Sorry to say, your friend is a douche.

Today, after mowing my neighbor's lawn for 3 years for free without being asked to, he finally came out while I was in the middle of it. Expecting a "Thank you" or some cash, he instead said, "You missed a spot" and walked back inside. FML

This would be the last time he gets a free service from me. He definitely was taking your nice gesture for granted.

Today, my dentist dropped dead of a heart attack. This depressing event was made worse by the fact that he collapsed while his hands were in my mouth. FML

Traumatizing. I'd be so shell shocked. One would think I had PTSD.

Today, the guy whose son I babysat for six hours straight confessed to being broke, then actually asked if he could pay me with sex instead. FML

He's a pervert. He was never really trying to pay you. He wanted sex. You should've called him out or request the money from his wife.

How embarrassing. I would've died.


Posted by Tiger's Lair No comments:
Email ThisBlogThis!Share to TwitterShare to FacebookShare to Pinterest
Labels: Blogging

So I watched Think Like a Man for the second time. It was on TV and I was trying to multi-task. I saw it in theaters originally. I liked the movie a lot. It was a good adaption from a self help book.

The characters were well put together based on the stereotype role in the book. You have the dreamer, player, mama's boy, single mother, career focused to name some characters. The characters are extreme versions of the role. But let me tell you what struck me this time.

Before my husband, I was the extreme version of "career focused". I didn't want a man at a lower level than me. He had to bring the same to the table. So while I was waiting for "Mr Equal" I was messing with less than. I was solely focused on money and not character. I wasn't putting myself in the environment where I could find them. So in actuality I was not helping myself. I was becoming bitter and crabby that I couldn't find my equal. I was Taraji Henson's character.

I had the definition of Mr Equal wrong. The incorrect definition was:
- a man whose salary was comparible to mine or more
- a man who worked Wall Street or a top bank professional
- a man who can take care of his own without asking me to loan him some money.

There was nothing in that definition about my current version of the New Mr Equal:
- a man who puts me first
- a man who loves me
- a man who will protect me
- a man I have a lot of things in common with
- a man I can be completely myself around
I can keep going on with this definition, but I don't have the room. Don't want you bored off your ass trying to read the long list.

So I gave up on men for a while. To be honest, I really wasn't interested in stuff that Mr Equal would have been interested in. I hate politics and sports. I don't like talking about money. I'm an accountant by trade but I hate reading business stuff. I do it, but don't enjoy it. So what would Mr Equal and I have in common? Nothing. I'd probably be bored and unhappy.

When I met Jason I felt completely at ease. There was no pretense at all. We meshed so well, that people thought we were married. I was 100% myself. He was 100% himself. There wasn't any need to put on airs. We met on friend basis that quickly led to much much more. I would say that my husband is my New Mr Equal. We have so much in common that it's scary. We have 90% the same interests. We have some of the same traits. I found my male equivalent.

Just like at the end of the movie, Taraji and I found our love of our lives.

My advice to those who are looking for their love. Find the guy who completes you. Someone who is your best friend. The guy who you can be yourself with. The one who gives you fireworks in your heart. And remember don't put any false expectations on him. Don't try to change him. He will change on his own in order to make you happy.

Posted by Tiger's Lair No comments:
Email ThisBlogThis!Share to TwitterShare to FacebookShare to Pinterest
Labels: Relationships

Marvin: One thing I know for sure are women and covert ops
Frank: That's two things, Marvin
Hahn: (to Frank) No, Grasshopper...(shaking his finger)...it's one
- Red 2

Posted by Tiger's Lair No comments:
Email ThisBlogThis!Share to TwitterShare to FacebookShare to Pinterest
Labels: Movies

I was only able to test FFXIV Beta once this weekend. Time has been flying and I've gotten much busier. However, I was able to play for a minimum of 2 hours. It's not much time. This BETA lasted longer than the others. I missed out greatly.

This run? I decided to finish up quests, take on new quests. I did travel a bit further in the map than I had before. I got new crystal points and learned Teleport. I died probably 4 times trying to finish quests. I didn't take aggro, but the mobs I took on for the quest kicked my butt. I was having difficulty attacking this day. Auto-lock was not working as it should. My hunt log has been filling up. What's great in the game is you don't have to sit and heal. You gain your HP back as you move on to next mob or back to town. You're not quite so vulnerable like in FFXI.

I bought some new gear because a quest required me to. Also, I learned how to check your messages. I had 2 messages that I couldn't for the life of me find how to read them. There's a moogle in town that allows you to. In FFXI, you had to go thru PlayOnline viewer to read your messages. I also haven't found how to take screen shots. So I take the pics with my phone. I only took one glamor photo this run. I like my character. She's pretty. 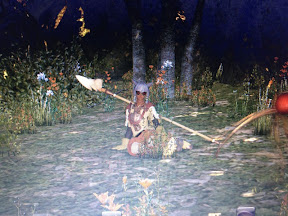 Next time.
Posted by Tiger's Lair No comments:
Email ThisBlogThis!Share to TwitterShare to FacebookShare to Pinterest
Labels: Gaming 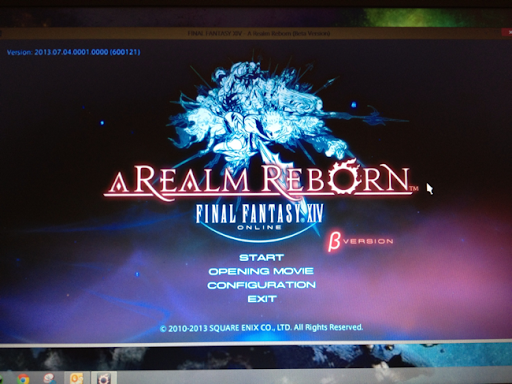 So I had an opportunity to beta test the new Final Fantasy XIV: A Realm Reborn (FFXIV), this & last weekend. I had played the original FFXIV for a very short time. Both games are a MMORPG (massive multiplayer online role playing game). This type of game allows you to play with people around the world to accomplish tasks within the game. Since it's social, you get to meet people and have fun. You also encounter the hardcore gamers who are all about hardcore gaming; only seeking folks like themselves.

The original FFXIV startup was very displeasing. You are thrust into battle without knowing what the hell was going on and had to keep two in-game characters alive. I started that game twice. This new version is completely different. The opening story is different. You can suffice it to say, this new one is a completely new story and game.

What I liked:
1. Like all the FF games, I love the graphics. Square Enix make kick ass graphics.
2. Scenery is beautiful. The world is beautiful.
3. The game seems like it is built for both the casual gamer and the hardcore gamer. You can play alone too. From what I tested, it doesn't have to be a time sink.
4. Quests now give experience points.
5. Quest people have tells. Map on the screen. Some of the same functions from FFXI carries thru to this game. All this makes the game a bit smoother.

The characters from the game are similar to FFXI. There are Hyur (humans), Elezen (elvaans), Roegadyn (galkas and has a female version), Miqo'te (Mithras and has a male version) and the cute little Lalafell (Tarutaru). 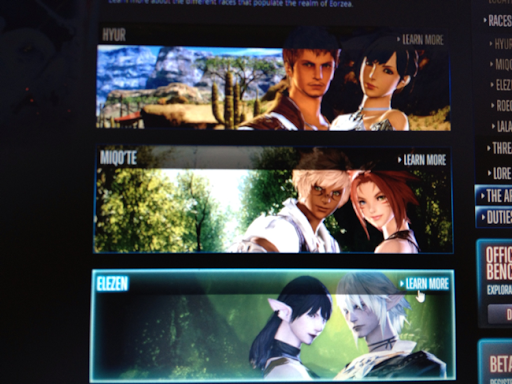 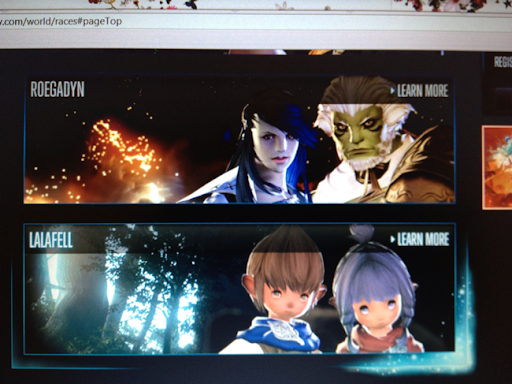 In FFXI, I was Elvaan. In XIV I chose to be a Mithra. I hope the normal assumption in XI that Mithra girls are really guys do not apply. Hopefully guys will pick the male version. 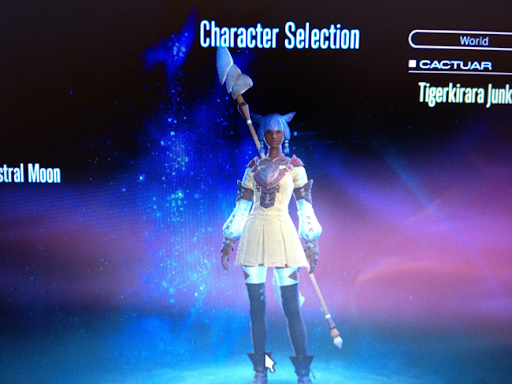 Gameplay is pretty easy with onscreen assistance. I don't know if they will be on in the final version of the game. They may be just for the beta so people know what to do. There a lot of stuff on the screen too. The macros of old are now on the bottom of the screen too.

My husband and I are thinking of maybe joining the game when it's full time. I'm also hoping I get to keep my character from all the betas to the live game.

If you are looking for me in the future, I'll be on the Cactuar server. Most people know me as Tigerkirara on XI. My name is Tigerkirara Junkie on XIV. This goes to show that I'm married to the guy who's surname on is also Junkie. 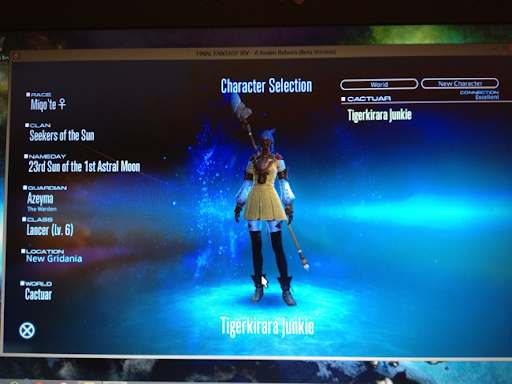 I used to have a blog dedicated to my adventuring in FFXI, but I don't think I will for XIV. I'll probably post them here on this blog. This blog us all about gaming & technology. Just look for the tag, FFXIV for all posts related to the game.  Until next time.